Know Your Beers – Our Guide To Pale Ale

So, in this new series from Annabel Smith, in-house Beer Sommelier at Cask Marque, we’re going to take a light hearted look at a range of beer styles, and help you persuade the uninitiated masses to try a tipple.

*Spoiler alert: some of these beer styles are NOT cask. Gulp!

Where Did Pale Ales Come From?

Burton-upon-Trent, the famous brewing town, was the home of Pale Ale in the 19th century due to the quality of the local water, which has a high level of a mineral called gypsum that gives pale ales their distinctive ‘biscuity’ backbone.

Innovation and advances in technology during the Industrial Revolution enabled brewers to control the colour of the beer, and the result was an ale which was far lighter in colour than most of its predecessors, hence the name ‘pale ale’.

What Are The Differences?

British Pale Ale – British bitter – sometimes referred to as pale ale, especially in a bottle – has a fine balance between the bitter hops and sweet, biscuit malt.

India Pale Ale – IPA’s were first developed during the 18th century in London for export to India, where it was drunk by the British colonialists who were crying out for decent beer as many of the local drinks had impurities or dangerously high levels of alcohol.

As beer did not travel well, the first batches sent from London to India (unsurprisingly) spoiled on the 6-month sea journey, until London brewer, George Hodgson, identified that if a beer was brewed with double the amount of hops, the antibacterial properties of the hops would prevent spoilage. Also brewing beer to a higher ABV would help preserve beer cargo on the long sea journeys – hence IPA was born.

Double IPA – These are big and bold! It has a booming hop aroma, a deep sweet body and then hefty bitterness at the end. The best are elegantly balanced between malt sweetness and huge hops. The worst taste like nail polish mixed with honey!!!!! 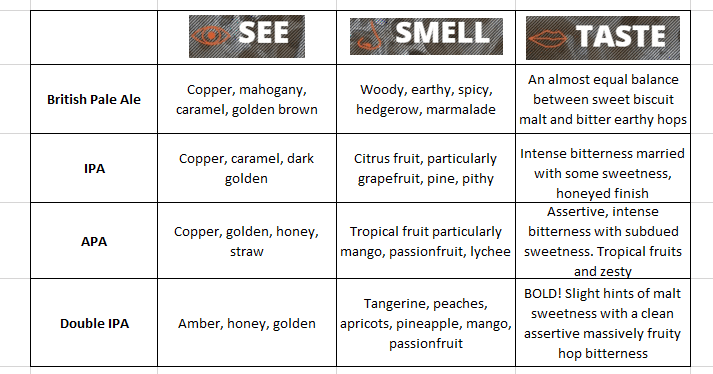 Indian and Mexican food are wonderfully COMPLEMENTED by hop-forward American-style IPAs. The citrusy, zesty hops CUT through chilli heat in creamy curries, and even complement the spices in carrot cake.

Intense APAs with their assertive, bright and zingy hops will CUT through any Mexican food (think Tacos, Quesadillas, chimichangas). The fresh lime and galangal elements in Thai and Vietnamese cuisine COMPLEMENT the hop.

Like our beer styles blog? Read our ones on Stouts & Porters, Wheat Beer, Trappist & Abbey Ales and Lager.