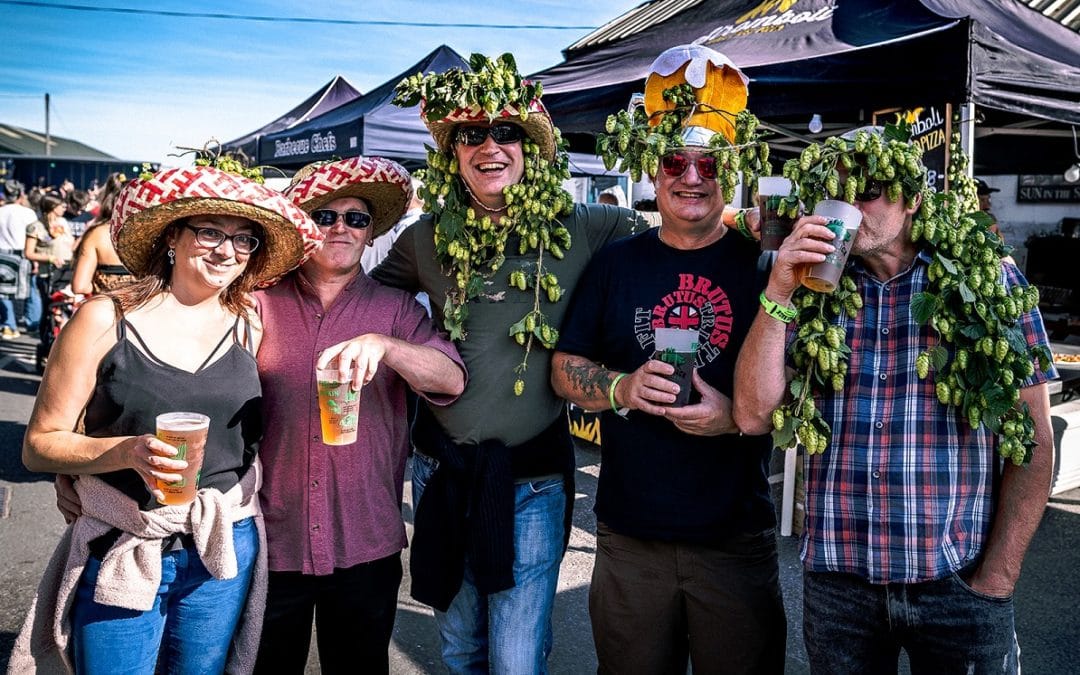 Hogs Back Brewery celebrated the first harvest of its new hop garden on Saturday (14th September), with a record 2,000 people joining the Hop Harvest Party at the brewery in Tongham near Farnham.

Guests enjoyed the glorious sunshine as well as live music from five bands, a Kids Zone, street food, and of course plenty of Hogs Back beers, including Green TEA, made with Fuggles hops freshly picked from the new hop garden – a hop harvest tradition, served exclusively at the party.  Hop bines were also used in another tradition, as guests took part in a Hop Garland competition. And in a nod to traditional harvesting techniques, dray horses Fred and Ginger offered rides around the hop garden.

The event was an enjoyable and memorable day for the guests, who included local residents, families and members of the Tongham TEA Club of loyal Hogs Back customers.

Hogs Back planted a new hop garden earlier this year, replacing the original garden created in 2014.  They transferred 2,000 plants from the old garden and planted 4,000 new ones, creating a new hop garden which is three times larger than the previous one, and closer to the brewery, on the Manor Farm site.

On the day, Hogs Back managing director Rupert Thompson named Alzheimer’s Society as the company’s charity partner for the next 12 months, presenting them with a cheque for £10,000. Hogs Back will aim to raise at least £10,000 more for the charity over the coming year. Thompson also presented a £10,000 cheque to Phyllis Tuckwell, the local hospice care provider which has been its nominated charity for the last year, taking the total donation to the charity to £20,000.

Returning to the brewery was Rev. Claire Holt, of St Paul’s Church in Tongham, who offered a thanksgiving for the harvest. Rev. Holt officiated over a blessing of the new hop garden in June this year.

Thompson said, “This was our fifth Hop Harvest Party and our best ever. We were blessed with the perfect weather for an outdoor event and our guests had a fantastic time drinking beer, listening to some wonderful music from our mainly local bands, and soaking up the sunshine.

“We’re delighted to see how the party has grown over the years to become the unmissable community event it is today. Hop farming is an important part of Farnham’s history and we’re happy to have brought it back to the region and to celebrate our harvest with local residents.

“This party was particularly special to us as it marked the first harvest of our new hop garden.  This is an essential part of our commitment to becoming an even more sustainable brewer.  With the hops grown just yards from the brewhouse, we are brewing beers with the freshest ingredients and creating a minimal carbon footprint – ‘from field to firkin in a furlong’, as we say.”

He added, “Moving hops from the old garden to the new one was a huge challenge, as plants had to be dug out and replanted by hand. We’re grateful to the Tongham TEA Club members who helped the Hogs Back team with this, and pleased that many of them were here today to enjoy the fruits of their labours with a refreshing pint of Green TEA.

“A big thank you to all the local businesses and volunteers who put in a huge amount of time and effort to make this year’s Hop Harvest Party such a wonderful event.”

The next event on the Hogs Back calendar is a Pizza & Music Evening at the brewery’s Summer Bar, on 26 September, featuring live music from a popular local performer, wood-fired pizzas from Stromboli, and a range of Hogs Back beers. The Hogs Back’s Summer Bar was set up earlier this summer with seating, canopy and lighting just outside the brewhouse, and has proved popular among drinkers wanting to enjoy sunny days and balmy evenings with a pint of refreshing beer brewed just yards away. For more details, visit: https://www.facebook.com/events/734082563684727/