Siren Brewery based in Berkshire has won the Campaign for Real Ale’s prestigious Champion Beer of Britain award, one of the highest accolades in the beer industry. Awarded on the opening day of the Great British Beer Festival at Olympia London, Broken Dream Breakfast Stout (6.5% ABV) scooped gold thanks to its deep and complex blend of chocolate, coffee and a touch of smoke. The judges commented that it stood out for its aroma, taste and finish, all of which were superb. 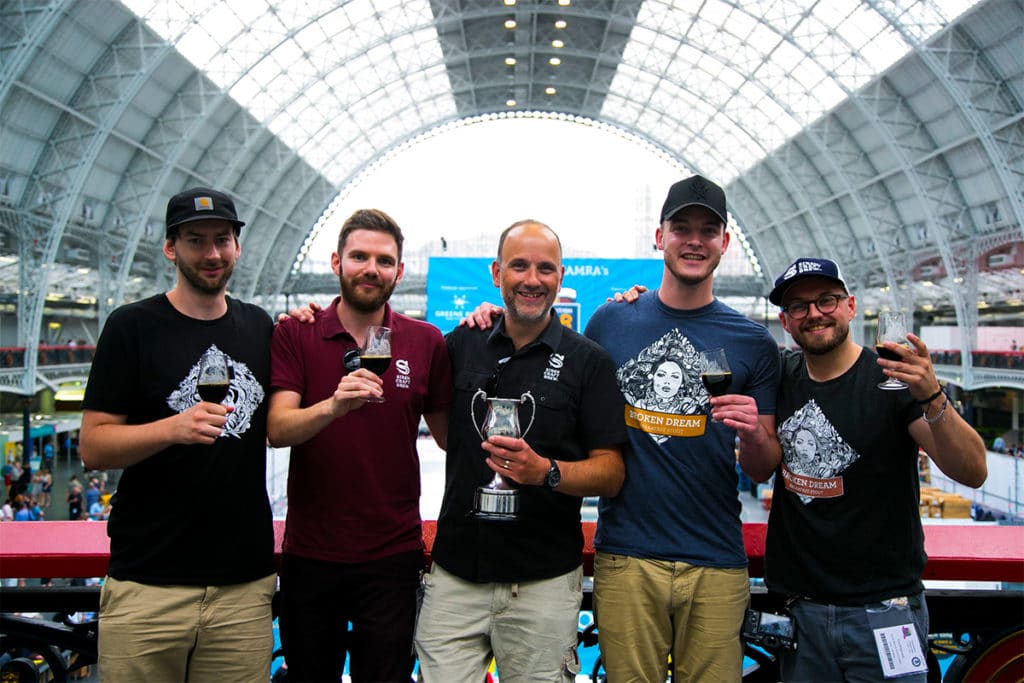 Named after the Sirens of Greek mythology, Siren Brewery captivated judges for the second time this year, having taken home silver in this year’s Champion Winter Beer of Britain competition at the Great British Beer Festival Winter back in February.

The final decision was made after a year of local tasting panels and regional heats in which the very best beers across the UK were invited to compete at the Great British Beer Festival. Final judging for the competition was held as the festival opened its doors to the public on 7 August.

The silver winner this year went to Suffolk-based Green Jack’s Ripper (8.5% ABV), a strong barley wine that is both dangerously smooth and yet well-hopped, and winner of CAMRA’s Champion Winter Beer of Britain competition earlier this year.

Bronze was taken by Tyne & Wear-based Mordue for their Workie Ticket (4.5% ABV). A complex and tasty bitter, this brew boasts plenty of malt and hops and a long, satisfying, bitter finish.

All finalists across each category will be available to sample at the Great British Beer Festival taking place this week, at which more than 50,000 people will have the chance to sample over a thousand different beers, ciders, perries, wines and gins under one roof.

Nick Boley, CAMRA’s National Director responsible for the competition says: “Congratulations to Siren Brewery for taking home the Champion Beer of Britain award with their Broken Dream Breakfast Stout – the highest beer accolade in the country. This is a distinctive, strong, well-balanced stout from an outstanding craft brewery. If there is any beer in the world that is dangerously drinkable, it’s this one!”

Siren Brewery founder Darron Anley said: “What a huge achievement that the Champion Beer of Britain is a heavy stout with coffee and lactose flavours in the midst of such warm summer weather! Broken Dream Breakfast Stout is one of our core beers and one of the first beers we ever brewed – we’re absolutely delighted.”

About the Great British Beer Festival
The Great British Beer Festival is one of the biggest, most exciting and well-known events in the beer and cider world. Organised by the Campaign for Real Ale (CAMRA) and run by volunteers, it brings hundreds of real ales, international beers and real ciders and perries under the iconic Olympia roof. Tickets can be purchased online: http://gbbf.org.uk

About CAMRA
CAMRA is an independent, voluntary organisation which campaigns for real ale, cider and perry as well as protecting and promoting community pubs and clubs and fighting for consumer rights. We have over 190,000 members across the country who work to champion beer and cider drinkers as well as pub and club goers.