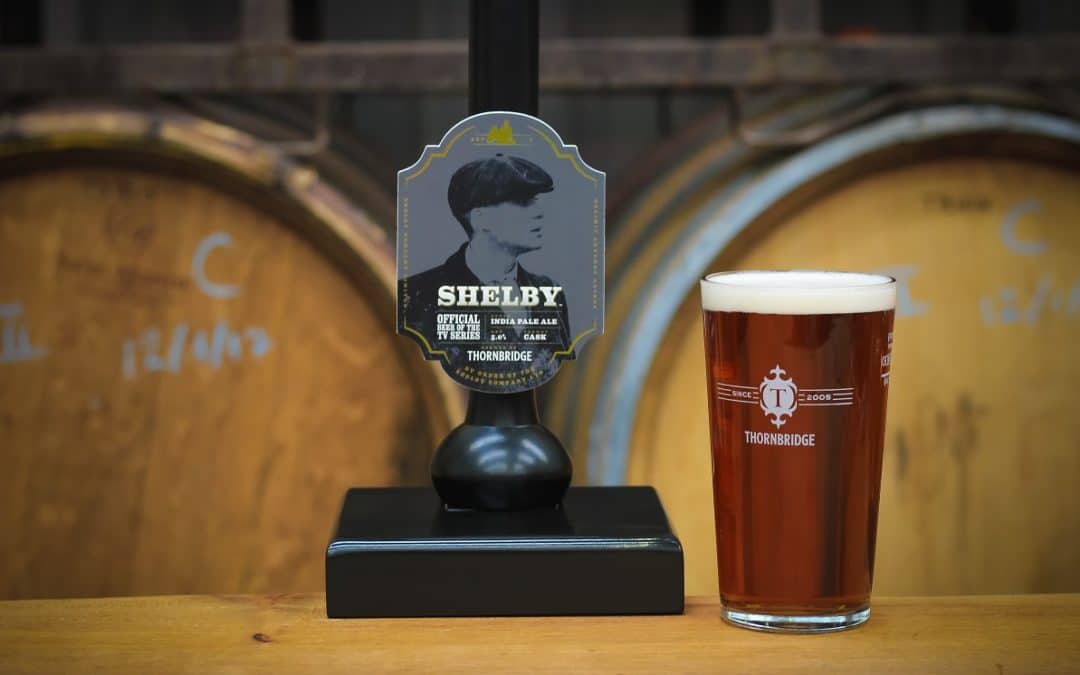 Inspired by the hit series, Shelby, A 5% India Pale Ale has been created by Thornbridge Brewery. Thornbridge took their inspiration from the kind of beer styles that would have been around in 1919, at the time of the Peaky Blinders, and have created something that they feel, The Garrison would be proud to serve.

The official launch of Shelby will be at the new Thornbridge and Co. Pub – The Colmore, in the heart of Birmingham on 20th February. Thornbridge will also be bottling Shelby which will be available next month.

Steve Knight, creator and writer of Peaky Blinders: “Shelby beer is the first and only legitimate Peaky endorsed beer.  It has been crafted to be the same brew the Peaky boys would have drunk in the pubs of Small Heath. It really is the authentic taste of the Peaky Blinders world.  Cheers.”

Jane Smith, Group Director, Brand Licensing & Gaming, Endemol Shine Group, said, “We have always wanted to find the right partner for a legitimate beer inspired by the Peaky Blinders series.  Thornbridge are that partner as they are truly passionate about the product they are creating which is an authentic beer capturing the essence of the world of Peaky Blinders.  We look forward to a long and fruitful partnership.”

Simon Webster, CEO of Thornbridge added, “We’re incredibly proud to be working alongside the creators of Peaky Blinders, it’s an honour to have been asked to collaborate with such a legendary show. We wanted to ensure we created something that the Peaky Blinders would have found on the bar at The Garrison and we think we’ve done just that. We hope Shelby will bring pleasure to many.”

Susan Waddell, Commercial Director at Caryn Mandabach Productions said: “It is thrilling to think that fans of the TV series can now enjoy drinking the kind of beer that Tommy Shelby and the Peaky Blinders would have drunk in The Garrison. We are delighted with this official partnership with Thornbridge for Peaky Blinders beer. As it says on the bottle: “By order of the Peaky Blinders!”

India Pale Ale was developed in England in the late 19th Century and became popular amongst the East India Trading Co. It was soon discovered that the sulphate rich water in Burton upon Trent created a cleaner, crisp and bitter beer which continued to grow in popularity in the local area.

Thornbridge have worked hard to create a version of the original India Pale Ale style that the Peaky Blinders would have indulged in. Shelby, named after the infamous brothers, is brewed with Fuggles and Bramling Cross hops. It pours golden amber in colour with a nose of stone fruit and red berries, a gentle maltiness on the palate and a wonderful citrus, lemon-pith bitterness.

Having always strived to create incredible, beautifully balanced and flavourful beer, the brew team went about ensuring every element of the brewing process was absolutely perfect. From making sure they started with the best blend of grist to create the body and mouthfeel to developing the right combination of yeast strains to create the finest possible flavour – every decision was carefully considered.

Five series have aired on BBC and the latest series launched in October on Netflix in the U.S. and in international markets where Netflix hold premier rights. With a stellar cast of actors including Cillian Murphy, Helen McCrory and Paul Anderson, the series has won multiple awards including the 2018 BAFTA for Best Drama Series and Best Drama at the 2019 National Television Awards.