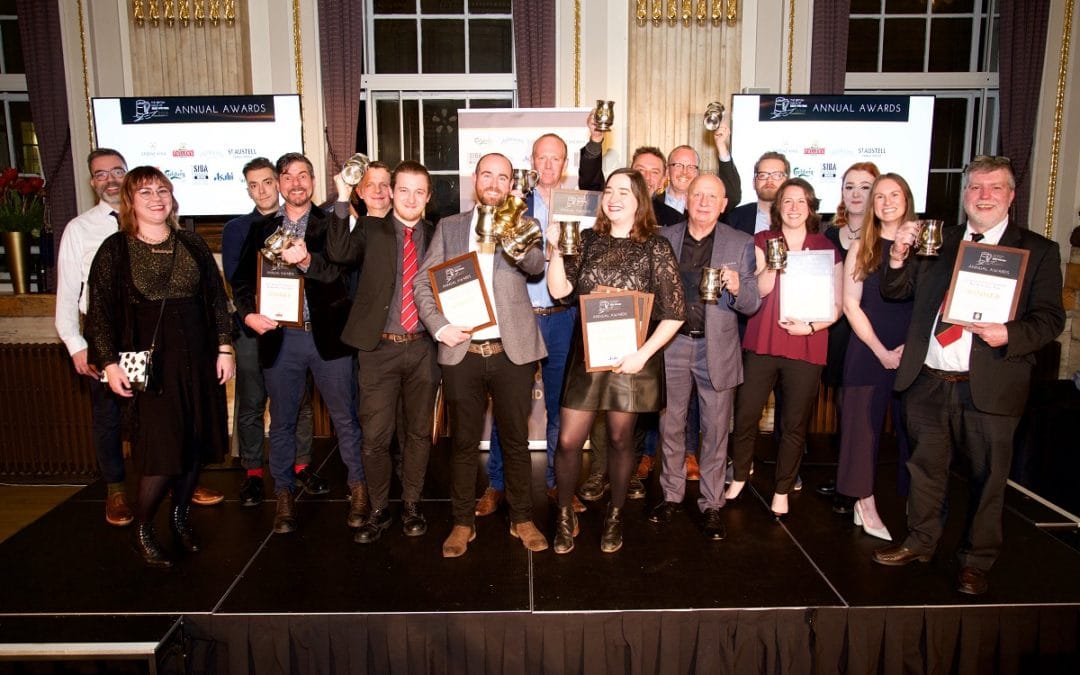 London-based beer writer and filmmaker Jonny Garrett has been named Beer Writer of the Year 2019 at the Guild of Beer Writers’ Annual Awards, presented on 3rd December in London.

Beer Writer of the Year is the top accolade in the Guild’s annual competition for writing about beer and pubs, which this year received more than 150 entries across 13 categories. Garrett won Gold Awards in the Broadcast and Online categories, and a Silver award in the Beer and Travel category, on his way to the top honour. This year’s highest-ever prize fund of £13,500 was shared between 12 Gold and Silver award winners.

Garrett is the co-founder and presenter of YouTube’s Craft Beer Channel. He and Brad Evans travel the world, visiting craft beers and bars, brewing collaborations with brewers and cooking or matching food with beer. The programme has 20,000 regular subscribers. Garrett is also a regular contributor to beer magazines and websites including BEER and Good Beer Hunting

Emma Inch, chair of judges for this year’s Awards after taking the Beer Writer of the Year title in 2018, said, “Jonny demonstrates a sure touch across a range of media from print to blog posts and feature films. His work is sometimes just for beer nerds, at other times educational for a non-beer audience, and at all times engaging and insightful. If we had a slot for a beer programme on mainstream TV, Jonny should make it.

“The standard of entries across all categories was extremely high and judges had a tough task choosing the winners and runners up. We were impressed by the levels of knowledge, energy and passion that shone through the works submitted by our finalists, whether they had written a column, published a book or produced a film.

“Tonight’s roll of honour includes a number of new names, with writers who only joined the Guild in the last couple of years making an impact and proving that our robust judging rewards talent, not time served. Everyone who received an award or a commendation should be extremely proud; they really are the cream of British beer writing in 2019 and we wish them all success in their future career communicating about beer and pubs.”

The Brewer of the Year title, sponsored by SIBA, was presented to Sophie de Ronde, founder of Burnt Mill Brewery, who won the highest number of votes in a poll of Guild members.

Presenting the Award, Guild Chair Pete Brown said: “Sophie is a highly technical and accomplished brewer who led the launch – and continued and international success – of Burnt Mill Brewery. She is hugely engaged in the beer industry, and passionate about taking beer to a wider audience, through her involvement in events such as International Women’s Collaboration Brew Day.”

The winners were announced at the Guild’s annual dinner held at One Great George Street in Westminster. Each dish was served with a specially selected beer: Beatnikz Republic’s Weizenart, Fuller’s Vintage Ale 2018, Anspach & Hobday’s The Smoked Brown and Thornbridge Brewery’s Necessary Evil. Beers from the Award’s sponsoring brewers – Asahi, Adnams, Carlsberg, Greene King, Heineken, St Austell Family Group and a number of SIBA’s award-winning member brewers – were enjoyed before and after dinner.