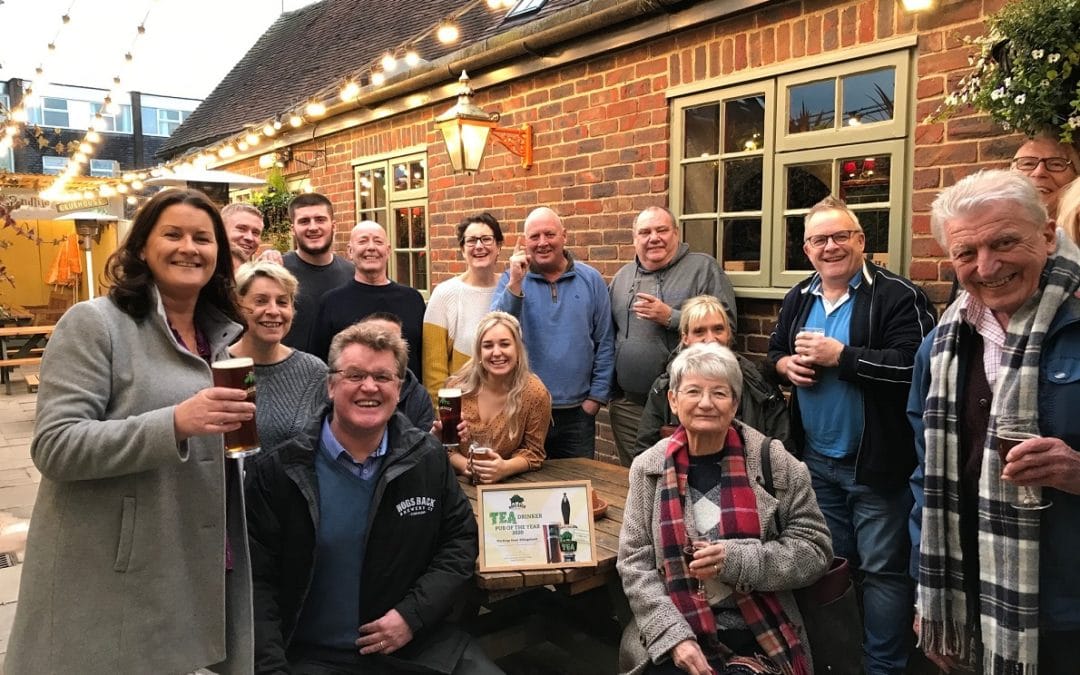 Hogs Back Brewery has named The Kings Head in Billingshurst, West Sussex, as the ‘TEA Drinkers’ Pub of the Year 2020′ at the end of its successful ‘Support Your Local, Go TEA Total’ campaign, which ran throughout January.

The campaign, designed to encourage more people to support their local during the pub trade’s quietest month, achieved Hogs Back’s highest ever levels of engagement among licensees and drinkers.

Although most of the pubs and drinkers taking part in Go TEA Total were in and around Surrey, where Hogs Back is based, the campaign also reached further afield. A competition with Cask Marque’s Cask Finder app generated 4,500 entries from drinkers as far afield as Newton Abbot and Darlington.

As well as the TEA Drinkers’ Pub of the Year, which attracted votes from 450 drinkers for 59 pubs,  the campaign also rewarded pubgoers through a weekly ‘TEA Total Thursday’ competition, giving brewery tours to those who ‘tagged’ the mates they were taking to the pub. Poster advertising at Farnham station highlighted the benefits of a reviving pint after the daily commute.

Hogs Back managing director Rupert Thompson said: “We’re delighted with the response to Go TEA Total among pubs and their customers, who clearly engaged with the campaign’s messages about banishing the January blues with a walk to the pub and a sociable pint of TEA.

“Licensees who supported Go TEA Total tell us that it was a frequent talking point at the bar and that their customers enjoyed taking part in the competitions by scanning the codes on beer mats.

“We’re confident the campaign made January a more cheerful month for many pubs and reminded pubgoers about why they love their local, and the importance of supporting it throughout the year.  We’re looking forward to building on Go Tea Total and making it bigger and better in 2021.”

As winners, the Kings Head received 20 vouchers for a Hogs Back Brewery tour and beer tasting, and a certificate to display in the pub alongside other awards – including the local West Sussex County Times Pub of the Year in 2019 and 2018.  The pub has been owned for the past six years by Oonagh & Colin Ganley, who have stocked Hogs Back TEA from the start.

Oonagh said: “We’ve just had our busiest January ever and we’re sure the TEA Total campaign played a part. Customers loved it and our staff team were really motivated to win the Pub of the Year title, so it definitely created a great buzz in the pub. We’ll be looking forward to TEA Total next year, and hoping to retain our title!”

The Kings Head won the TEA Drinkers’ Pub of the Year title in a tight race, and Hogs Back also presented Highly Commended certificates to four other pubs, who scored highly in the public vote: The Wooden Bridge, Guildford; The Wheatsheaf, Camberley; The Onslow Arms, Clandon, Surrey, and The Crispin, Wokingham.