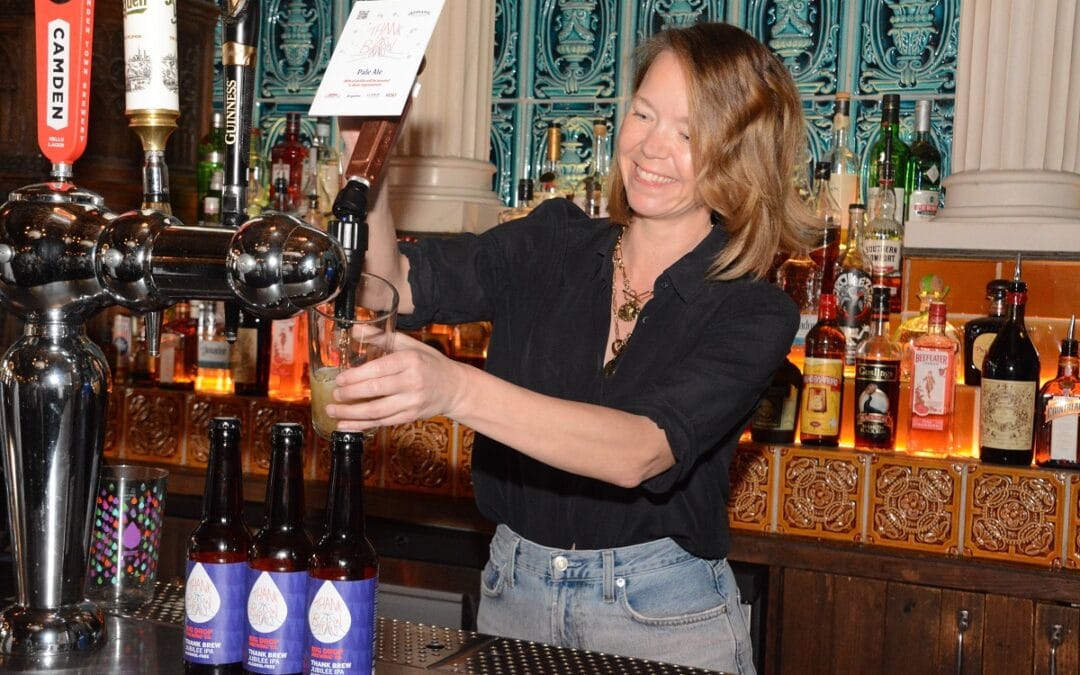 Line of Duty and Motherland actor Anna Maxwell Martin poured the first pint of Thank Brew along with lead Thank Brew brewer Fergus Fitzpatrick at The Old Queen’s Head pub in North London. All profits will go towards supporting Ukrainian refugees arriving in the UK and community focused groups across the country.

Thirty five breweries – including iconic brands like Adnams, St Austell and Budweiser Brewing Group, the UK arm of AB InBev – and up to 5,000 pubs – including Punch and Greene King – signed up to brew and serve the beer and host events. Every UK pub, bar, licensed premises and brewery in Britain is invited to take part – a perfect opportunity to say their own big thank you to Her Majesty the Queen and to their local customers and communities.

The campaign is backed by leading trade bodies UKHospitality, the British Beer and Pub Association (BBPA), the Campaign for Real Ale (CAMRA), the Society of Independent Brewers (SIBA), the British Institute of InnKeeping (BII) and the BFBi – the trade body representing the entire supply chain into the beverage industry

As Thank Brew’s ‘Chief Brewer’, Fergus has crafted an easy-drinking 3.5% ABV pale ale, using a classic British ale yeast. And he’s teamed up with Big Drop to oversee the creation of a unique 0.5% ‘Jubilee IPA’ version, brewed and bottled exclusively by the alcohol-free specialist. Members of the public can now place orders in the Big Drop shop for the 0.5% ABV Thank Brew Jubile IPA which is being bottled now for delivery in mid May.

The tasty brew is a refreshingly fruity IPA with a moreish bitter twist on the tongue that’s perfect for the Jubilee weekend. The link to order is: https://shop.bigdropbrew.com/products/thank-brew And pubs and licensed premises or Thank You Day event organisers keen to serve the celebratory alcohol free brew can order for wholesale fulfilment now via : https://www.eebriatrade.com/producer/show/693?r=bigdropbrewing

Organisers The Good Beer Co are now inviting every brewer, pub, or licensee who wants to brew or serve the beers, get involved or host a Thank You Day event to sign up now using the Good Beer Co. website

Kate Nicholls OBE, CEO of UKHospitality, said: “The nation’s hospitality venues will be looking forward to a bumper weekend of celebrations for Her Majesty’s historic Jubilee, and it’s great that there will be a dedicated brew to mark the occasion. Our sector has suffered dreadfully over the past two years, so it will be wonderful to raise a glass to the Queen and each other, and look to happier times.”