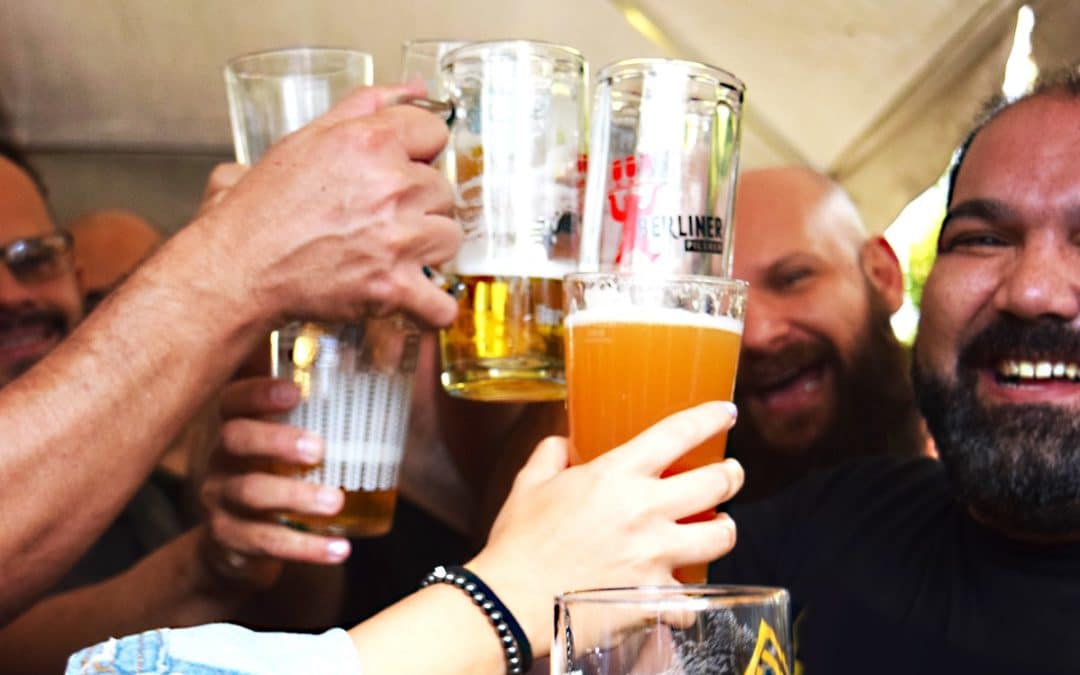 There are awareness events for everything from National Potato Day and National Coding Week to Limerick Day and Be Nice to Nettles Week. Some are quite outlandish.

“However, there’s one National Week that everyone in the pub and beer industry can relate to,” says Cask Marque’s Paul Nunny. “That is Cask Ale Week.”

He points out that real ale drinkers spend more on food and drink in pubs than any other group – over £1,000 a year on average. This means a week focussed on promoting cask ale, helping to drive footfall and converting drinkers to cask, has a sound commercial rationale.

“Since Cask Ale Week was first run back in the noughties, the ‘Experience Economy’ has grown exponentially,” he says. “Consumers are seeking more than food to fill their stomachs and drink to quench their thirsts. They want experiences; they are looking to be part of something.”

The 11-day long celebration of the country’s national drink, beginning on September 19th, provides a platform, free to breweries, pubcos and pubs to use as they wish. “It helps the industry to tap into the pockets of people keen to try out new things. It’s a great opportunity to engage consumers who are increasingly dependent on big occasions for their social activities. A national week that works for the local!”

He points out that it’s not too late to get something organised. Licensees and brewers across the country are invited to create a special promotion or activity from 19th to 29th September – or put one of their planned activities under its umbrella. It doesn’t have to be complicated. A pub quiz, for example, can soon become a Cask Ale Week quiz by adding a round of questions on cask beer. Or there is a ready-made Cask Ale Week quiz. Just email: [email protected]ask-marque.co.uk to get hold of a copy.

“You know what would work in your pub or brewery,” says Nunny. “The invitation is for you to use the Week – or even one day of the Week – in the way it best suits you.”

The 9,000 pubs that have Cask Marque accreditation already appear on the free, easy-to-use CaskFinder App, and are automatically part of the World’s Biggest Ale Trail. During Cask Ale Week, there are extra incentives for drinkers to use the app, try new pubs and notch up their scores. “Each of those pubs could be using social media to promote their offer to Ale Trailers and would-be new customers,” says Nunny.

Pubs and breweries across the country will, among other things, host beer festivals, conduct tutored tastings, provide brewery tours, offer special promotions, promote beers of the Week and create photo opportunities. It will all be in the name of cask, ‘hand-pump’ or ‘real’ ale but is likely to benefit other drink categories and food sales too.

A chance too good to be missed.

A selection of activities happening during Cask Ale Week

Palmers Brewery (Bridport, Dorset) are celebrating their 225th birthday with a party at their brewery on Saturday, 28th September (From 12pm onwards).

There will be a bar offering a full line up of their award-winning cask ales, as well as ciders from Dorset Orchards. Customers will be also be able to enjoy a scrumptious hog roast, tours of the brewery and listen to live music from the Vinyl Monkeys.

Donations will also be collected on the day in support of the Minerva Learning Trust.

Hook Norton Brewery (Banbury, Oxfordshire) are beginning their 170th birthday celebrations with a party and open day at their brewery on Saturday, 14th September. Their ‘Birthday Bash’ is then set to continue in style at The Castle, Oxford on Friday, 20th September – with cask ale, free beer, bunting, and balloons accompanying live music.

As part of the Week, Hook Norton’s Shire horses will also be supporting the mobile bar, dispensing cask ale to Warwick Racecourse goers. This coincides with the Warwickshire Food & Drink Festival on Tuesday, 24th September.

Beerble Fish (Edmonton, North London) will be making their Cask Ale Week debut this year. On Sunday, 22 September, they will be showcasing their beers, including some of their Heritage Core Range. And on Saturday, 28 September, their taproom and bottle shop in the brewery will be open for all to visit. Brewery-only specials will be available on tap, as well as bottles to take away.

Moor Beer Company (Bristol) are launching ‘Community Cask Thursday’ – a weekly event in time with Bristol Beer Week (13th – 22nd September) where discounts are offered to everyone who helps the community. This could apply to NHS workers, members of the fire service, police service, and armed service – or even just someone who has done a good deed on that day!

Writer’s Block is a rich, red ale brewed with Amarillo and jester hops and CaraRed melt, with 10p from every pint going to support the festival.

Nicholson’s (London and other key cities) are launching their free pint offer during Cask Ale Week. In order to claim a free pint of Nicholson’s Pale Ale, Doom bar, London Pride – or any cask beer from the fine Cask Ale Festival selection – all consumers have to do is to download the CaskFinder App, register with the World’s Biggest Ale Trail, and check out the Nicholson’s offer.

Stewart Brewing (Edinburgh) are putting forward a one-off brewer beer (that will be available at Bennets Bar) specially for the Chilli Cook Off 2019 on Saturday, 21st September. This fiery competition, ran by Lupe Pintos Deli, sees 10 Edinburgh venues battle it out to see who produces the best chilli con carne, voted for by around 600 keen judges, mostly in fancy dress attire.

The Snooty Fox (Mildmay Ward, North London) will be celebrating all things vegan in Cask Ale Week. They will be offering vegan beers to try from craft breweries around the UK, paired with a range of vegan specials served throughout.

Beer from the Wood (Belfast, Northern Ireland) are hosting a pub crawl around Belfast on Saturday, 28st September. Pub crawlers will make a noon start in The John Hewitt – Belfast Bar before moving onto other cask establishments around the city centre.

Dawkins Ales are hosting an Ale Trail, linked in with Bristol Beer Week (13th to 22nd September), whereby if customers buy a pint of any Dawkins beer or cider at all five of their five Bristol pubs, they will receive a free Dawkins t-shirt.

The Barley Mow (Westminster, London) will be running a London-brewed ale week, rotating 20 different locally brewed ales during the 11 days.

The Fur & Feather Inn (Woodbastwick, Norfolk) are celebrating the last day of Cask Ale Week (Sunday, September 29) with a special beer quiz hosted by Woodforde’s Brewery. Knowledge on all things beer – including pub names, breweries, and ingredients will be tested, alongside a special Woodforde’s round. The winning quiz team will receive an ‘ale-mazing’ prize of free beer alongside a brewery tour experience including lunch.

A fantastic offer of free pints to everybody registered on the World’s Biggest Ale Trail.

The Ipswich and East Suffolk branch of the Campaign for Real Ale (CAMRA) have set up a 3 ½ week Ale Trail, running from Thursday, 12th September to Sunday, 6th October.

Over 30 pubs have been divided into 5 trails in and around Ipswich, Stowmarket and Woodbridge. Ale trailers can win fantastic prizes along the way and could even make it into the ‘hall of honour’.

St Austells (Cornwall) are putting on two promotions as part of the Week:

Moorhouse’s Brewery (Burnley) are running a competition on Facebook to win a day brewing the winner’s own special beer.

The Adelphi (Leeds) are offering 20% off all ales and draught beer throughout Cask Ale Week.

The Vaults (Rutland, East Midlands) are offering a free ½ ale with every ½ bought during England’s first two games in the 2019 Rugby World Cup.

Alexander’s Pub (Lake District, Cumbria) are celebrating Cask Ale Week by selling all their real ale for £3 a pint.

This is organised by Stockport and South Manchester CAMRA to coincide with Cask Ale Week. In its fifth year since its inauguration, the week is full of fantastic beer events including: ale trails, pub crawls, brewery tours, cellar tours, beer tastings, educational beer talks, and food & beer festivals.

This year’s highlights include a ‘tutored tasting of beer styles through the ages’ by Annabel Smith, beer sommelier and the country’s first female beer inspector. Award-winning stand-up and pub aficionado James Dowdeswell is also presenting his show ‘A Pub Manifesto’ whereby he uses humour to make the plight of the pub public and to generate a response.